Merry Christmas & thanks for reading!

Things have been a bit quiet the last couple of weeks with work and moving home taking over and leaving me with little time to blog. Hopefully normal service should resume in the New Year...

Anyway, I just wanted to thank everyone who was subscribed, read and commented on the blog over the last year.  I really appreciate your support and it makes it all worthwhile.

Where ever you are, and whatever you are doing this Christmas, I hope you have a wonderful time.

Personally I'll be whizzing between London and the North East visiting friends and family and generally eating and drinking too much!

Enjoy the break and come back refreshed and raring to go in 2011...

Just a quick update and some thoughts on a couple of recent posts...

This has received massive coverage and been analysed on many blogs, but I just wanted to add a couple of things after the news on Third Sector that it ended up raising over £100,000.

It seems that a lot of people used the opportunity to encourage their friends to support the NSPCC and to make a donation.  Sue kindly sent me this screen-shot of her daughter's Facebook page: 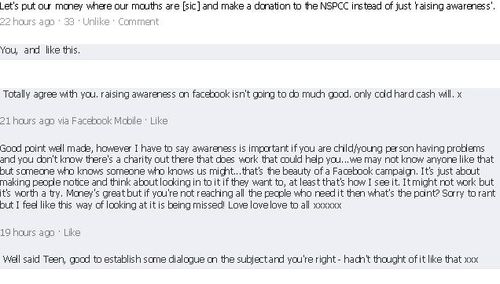 This sort of conversation seems to have been repeated across the country and led to all the donations, which is great.

I just hope we don't now see a mass of Facebook charity campaigns asking people to change their avatars, thought I suspect it might happen...

My fiance also used the chance to promote her own charity (working to preventing violence to children happening in the first place) and managed to secure a few donations off the back of the campaign as well.

This leads me nicely on to an update on my posts on events and trying to think of events that I could possibly organise for my own charity.

Thanks to Aline, Liz, Alison, Amy, Mike, James and everyone else who has given me ideas.

I've had some great suggestions including the use of the Boris Bikes, an Underground treasure hunt, some sort of sensory deprivation challenge, night time event and many others.

I'm hoping to spend some time in the New Year coming up with my master plan!

As you can see from the above, the conversation has led to idea of a 'Wear a Onesy to Work' event for Wave Trust.

If you'd be up for the challenge of wearing one of these over-sized baby grows that seem to be in fashion this winter (available from all good Primark's...) then get in touch!

Finally, below is the introduction for an advert for a fundraising position to come and work with me.

If you are interested in finding out more or know anyone who would be suitable then please get in touch.

I think it would be an ideal job for an up and coming fundraiser who is looking for a challenging career move on the way to bigger and better things, but then again I'm biased!

Do you aspire to be one of the UK’s top fundraisers?

Have you got what it takes to become our fundraising apprentice?

At GLFB we’re launching a search for some of the UK’s best up and coming fundraisers to help us implement our ambitious fundraising strategy.

Our goal over the next few years is straight forward - we want to raise sufficient funds to make London the best city in the world for visually impaired people to live.

To do this we need to massively increase our fundraising and we want people to join us at the beginning of this exciting time.

This is your opportunity to shine and show your talent.

To see the rest of the advert, go to Charity Job.

How the NCVO Funding Report came up with the wrong answer to a great question...

The NCVO Funding Commission have produced a fascinating report on the future of funding for charities.

It presents the evidence in a clear and compelling way and outlines the current issues and trends, sets out potential new mechanisms for giving and gives some realistic ways in how this could be achieved e.g. a 10% increase in the number of adults giving under £100 per month (from 50% of the population to 55%) would raise an extra £8.6 billion per annum.

So far, so good and it's all very exciting, but then comes the big let down - how they propose to achieve this, which frankly is unambitious, unrealistic and not in the slightest bit credible.

They want to achieve this £8.7 billion increase in giving by spending £10 million on a 'Better Asking' campaign!

That's right they want to achieve an 870:1 return on investment by teaching fundraisers to ask for money better.

To quote the report they want to spend the £10 million on a campaign which:

"should aim to increase the confidence and the competence of all those involved in asking for funds for charities, including trustees, chief executives, paid fundraisers, volunteer fundraisers and communications staff." Page 46.

Using the report's own figures this equates to around £292* for each of the estimated 24,000 staff who have some fundraising responsibility in their role.  Even worse, this figure excludes trustees, volunteers etc and wouldn't even pay for a person to attend the Institute of Fundraising Annual Conference.

After defining the problem so well it is so disappointing to read such an underwhelming proposal at the end of it.

Where is the ambition? The vision? The inspiration? The realism?

It really is worrying for fundraising if that is the best solution that a year long commission can come up with.

So, what would I do instead?

First of all I'd be realistic - if you want to increase giving by that much, then you are going to have to spend a hell of a lot more than £10 million to achieve it.

Thirdly, tackle the problem from both ends. As well as making fundraisers better at asking, listen to the likes of Ken Burnett, Mark Phillips, Amanda Santer and others who preach about inspiring donors and then help fundraisers put this into action.

Finally, make people feel proud of their giving, demonstrate the impact they are making and motivate them so that they want to give more and then tell others about it.

*: this is based on the £7m of the £10m which is outlined for training.  The rest is on an admin and a media campaign.

Changing Your Facebook Pic for a Cause - Modern Day Chain Letter or Making an Important Point?

If you are on Facebook then you might have noticed a strange thing happening over the last few days...

Thousands have people have been changing their profile pics to cartoon characters supposedly in support of the NSPCC and stopping child abuse.

To me this is a pretty pointless exercise (I like this spoof) and I completely agree with this post from my future brother-in-law (excuse the bad language): However, I'd love to hear your opinions on this sort of activity.

In the meantime, here are few pros and cons that i've quickly put together...

Gets people talking about the NSPCC & child abuse.

An easy way to show your support for an important issue.

Comes from the grassroots (no registration/details need to be given) and so is easily spread to reach a large audience.

Could be the first step on the road to engagement and people getting more involved with the NSPCC's work.

Will it actually achieve anything?

Not actually got that strong a connection with the cause.

No data capture or way for the NSPCC to use this show of support. 1,281 people 'like' this, 227 comments (which are worth a read) and a number of people making a donation mean that the campaign may have more to it than I first gave it credit for.

A guy called James Gregory, who also shared my cynicism and criticised the idea, decided to do something about it to raise money for the NSPCC and set up this Justgiving campaign that is on course to raise £4,000.

A week later than usual (last week was one of those weeks!) here's a summary of some of my favourite recent articles.

Ken Burnett with a list of seven things that every fundraiser should be doing.  I'd only give myself one or two out of seven, but trying hard to get there...

Katya's first and second parts of what looks like will be a fascinating series on the science of giving.

Stephen Thomas with some good conference tips (and things to avoid).

Jeff with some interesting research on value of freemiums for younger donors.

Sean with some interesting notes on the creative process from an Alan Clayton talk.

Damian on anger and gratitude.

Mark on what makes a good banner ad?

Lucy with a lovely, poetic piece of writing on life.

Lori on what to do after someone makes a gift.

Agents of Good ask if we are innovative?

Guy on how to enchant your customers.

Seth on where ideas come from.

How many of your employees love your company (and why it matters).

Seven triggers that will fascinate your audience.

What can we learn from multiple Specsavers ads?

Specsavers is a UK based opticians and I'm always amazed at the variety of their adverts and the fact that they seem to have two or three distinct campaigns running at any one time.

This seems to fly in the face of conventional wisdom where you generally have one main advertising campaign running at any moment.

However, given that they had a turnover of £1.2 billion in 2008/09 and have expanded across Europe and Australia it would appear that they have a formula for success that is worth looking a bit closer at.

The first thing to say is that there are some key themes that run across all the Specsavers advertising.

In essence they use much of the Heath brother's 'SUCCESs' model from the 'Made to Stick' book.  The adverts tell a story for their audience, are simple to understand, have a concrete offer linked to the ad, include an unexpected twist and create an emotional connection.

Watch three of their current adverts to see this in action:

Mr Men - target audience is people in their 30 & 40's with a nostalgic streak. Buy one get one free glasses offer.

I'd also wager that the adverts run in different places and at different times to best target their chosen audience.

So what can we learn from their success?

Get these five things right, like Specsavers have, and you'll create something that people will remember and will want to give to.