This post is my submission for February 's non-profit blog carnival. This month it is being hosted by Marc Pitman at Fundraising Coach. Marc wants to know "How do you keep your donors wanting to come back?"

There has been a huge number of blog posts and articles on retention at the start of 2013 from a variety of respected authors. It's a crucial topic and fundamental to our profession, but what I haven't seen is too many real life examples and results. That's why I wanted to share some of my own recent findings.

A tale of two cold mailings

A couple of months before starting my current role my charity undertook a cold mailing. It did ok, but the donors were put straight into our established mailing programme.

Ten months later we used the same list for another cold mailing. This time we put in place a simple and structured donor journey for the first few communications.

The aim of this was to:

The results show the importance of having a welcome process and donor journey planned for any recruitment you do.

There is a caveat that these results are based on a small numbers of donors and are not statistically significant. However, they show that big improvements are possible by implementing a simple process. 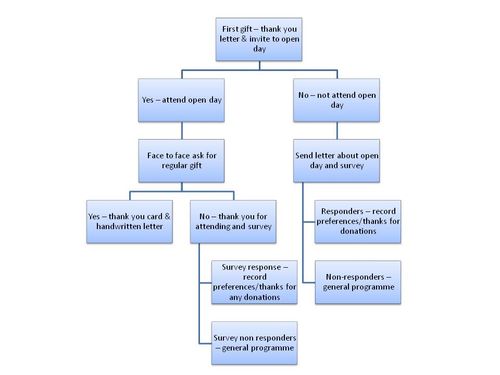 The above is by no means perfect.

We can, and should, make better use of the phone and e-mail and we left it longer than I would like between some of the steps. We can also think about what else we can do for the non-responders to boost response.

As we did it in-house then this process is quite labour intensive and it does increase costs in the short term. However,  by my calculations the donors who have had the welcome process will have donated double the amount of the other donors by the end of year two. A huge difference that more than justifies the initial effort.

The obvious place to start this week is the furore surrounding comments made by Giles Pegram (a man I have huge respect and admiration for) around the Summit - an event organised to talk about some of the problems facing fundraising.

You can read the full story here, plus follow up pieces by Charity Chicks and the Agitator.

Perhaps the definitive piece, and hopefully the line in the sand, comes from Ken Burnett. Right, now get back to the serious matter of fundraising!

More insight on retention from the Agitator.

Agents of Good ask where is the vision?

Start talking to donors about the why and the where says the Donor Dreams blog.

John Baguley on fundraising and zombies.

What works should trump what looks nice.

Amanda gives a quick lesson on how to get someone's attention in the right way.

Building donor relationships one step at a time.

The Far Edge of Promise: Why our definition of "donor research" must change.

Bright+3 asks you to pretend to be your donor (HT Jeff Brooks at Future Fundraising Now).

Clarification with some thoughts on Dan Pink's new book on selling. I'm currently reading this and finding it has lots of ideas/implementation for fundraising.

Thanks to funding from the City of London Corporation’s charity City Bridge Trust the venture will run for three years and promote London as a centre for global philanthropy, part of the Lord Mayor of the City of London Roger Gifford’s aim too, it also aims to embed a culture of effective philanthropy in the City among young professionals.

What mistakes do you see fundraisers making?

Unfortunately I still hear horror stories from donors and their advisors about their experiences with fundraisers and charities.

Giving should be a joy, but sadly this isn’t always the case.

I recently spoke to an advisor whose client was interested in making a £500,000 donation to a particular charity. She wrote to the CEO of the charity to say this but didn’t hear back. Four weeks later she finally got a response by which time the donation was lost forever. This is not an isolated case.

The inability for fundraisers or charities to thank donors is also surprisingly common.  Some don’t even bother and only re-contact a donor when they make another appeal for funds. It’s quite astounding that such a basic thing as ‘thanks’ is executed so poorly.

Many philanthropists describe the “joy of giving” to projects. Yet, the inability of fundraisers to thank donors genuinely and authentically can mean the abrupt end of what could have been a beautiful relationship.

Fundraisers often don’t talk in the same language as philanthropists and that can be a missed opportunity. For example, people from the City live in a world of risk and return,  and are more likely to see giving as an investment than someone who is making a grant from a long standing, traditional, family trust perhaps. Fundraisers need to tailor their approach accordingly.

In my experience, many donors don’t give big first time round. They take baby steps. See how it goes with a charity and then if they like what they see they give more next time round. So fundraisers need to look beyond the size of a first gift to the potential of the long-term donor relationship. They should take more of an investment rather than a sales approach to fundraising.

What more do we need to do to promote giving?

A lot is being done and we are in fact already one of the most generous nations in the world. However we lag behind the US in giving and how we talk and celebrate our philanthropy. Of course culturally and historically we are very different from the US in terms of what the State is expected to provide, and what should be funded privately. However, I still think there are lessons to be learned.

Thomas Hughes-Hallet, who has just won a Beacon Award as a Philanthropy Advocate is one of the few UK philanthropists who will openly stand up and say how much he gives. We could do with more people talking about their giving so it becomes more mainstream.

Philanthropy really should come out of the closet and we should be proud of our tradition of philanthropy.

Campaigns such as Trevor Pears’ Give More  and our own City Philanthropy – A Wealth of Opportunity is helping that happen by giving people the chance to talk about their giving online. I am particularly optimistic that this will change as young philanthropists, who give together and at a lower level, are happy to be vocal about giving.

And initiatives like the Beacon Awards  are about celebrating philanthropy and recognising the people who are helping to change the world. Hopefully in the coming years we will see more and more people talking openly about their giving.

Catching them young: how to engage and nurture young philanthropists

Over the next two posts I’ll share some of the Cheryl’s insights on fundraising and philanthropy, starting with a closer look at young philanthropists.

How do today’s City philanthropists differ from earlier generations?

Over the last few years we’ve seen a big shift in how the younger generation of City workers approach philanthropy. Increasingly people want to start giving whilst they are still working and not once they have retired.

This wish to embed philanthropy into their working lives is very exciting, but also poses a challenge, as charities need to adapt to fit into this new approach. People no longer want to just write a cheque and forget about it.

So how should charities respond?

They need to understand how this new breed of donor operates and adjust their fundraising accordingly.

In my experience this wave of new philanthropists are looking for several things from their giving:

Overall, charities and fundraisers need to think afresh on how they pitch to these philanthropists. They need to commoditise differently, packaging up the charitable need into niche offers that they can really buy into. These young philanthropists are not spending megabucks but meaningful amounts of money so fundraisers should think about access points. They also want to give time and skills along with money which is quite a different proposition.

In achieving a better and more fruitful understanding between donors and fundraisers there needs to be communication and  better listening. Major donor fundraising is a bespoke market and every major donor is different. A philanthropist’s choice of charities reflects very personal aspects of their personality, values, beliefs and individualism.

The best fundraisers help make giving a pleasure and create with philanthropists and not to or for them.

Can you give me some examples of this in practice?

Certainly. We are seeing a trend for philanthropists working together and clubbing together to fund projects that they are interested in.

For example, the Funding Network  brings together donors aand invites charities to pitch for funds dragons den style. It is tailored specifically for a young City audience with events in exclusive settings around London. The Network makes giving social and members have a shared experience of donating. It also makes charities work hard for the money through the competitive pitching process

Another example is the recently formed Young Philanthropy Syndicate.  This is for people taking their first steps in giving. An individual identifies a cause that motivates them and gathers friends and colleagues to join the syndicate. They are then mentored by an experienced philanthropist, who matches the syndicate’s donation

Next time we will be discussing common mistakes fundraiser’s make and how we can do more to promote giving.

Here the latest round-up of fundraising articles for you to enjoy.

If you'd like updates of the best posts on fundraising on a more regular basis, then I'm helping Reinier from 101 Fundraising with his new Fundraising Fever Facebook page.

We'll be listing our favourite posts throughout the week, so it's a great place to check if you want a quick read and have a few minutes spare. We're looking for some in the US or Canada to help us out as well, so get in touch if you're interested.

Plug over, here is this week's round-up. Enjoy.

If you're interested in innovation then check out the "Innovation (still) Rules" report from NFP Synergy and Lucy Gower.

An interesting interview with a donor on how they decided which direct debits to cancel.

Ifundraiser on the art of saying thank you.

Charlie asks "whose side are you on?"

Jeff with the seven sins and seven virtues of fundraising.

Agents of Good on good writing and good design.

Passionate Giving share the first of three things that bother them about fundraising.

Aline celebrates the craft of fundraising.

January's non-profit blog carnival on dreams and aspirations for 2013 is now up.

I enjoyed this three part series from the Donor Dreams blog on lessons from the Chicago Cubs Convention.