January is nearly over and it's time for another reading round-up. Enjoy!

Why donor experience matters. Paul de Gregorio shares a short, but powerful story about his mum and customer service.

Lots of great posts on 101 Fundraising. I particularly liked these two:

Lucy Caldicott urges fundraisers to remember the 'why' behind your cause.

Veritus Group ask what do you hear from your donors?

Clairification gives us her top 10 nonprofit leadership lessons for 2015.

Bloomerang urges nonprofits to be the fortune not the cookie.

Drayton Bird on the importance of measuring your results.

It's time for my first reading round-up of the year. There's lots of great stuff as bloggers start the year with a blogging bang!

I was delighted to read Rogare's announcement that relationship fundraising is going to be the topic for their first. A big thanks to Bloomerang and Pursuant for partnering on this important topic. As I said last week, I'm going to be blogging on the subject a lot more in 2015.

Have you started thinking about your Christmas 2015 appeal? Read Mark Phillip's post on the ghosts of Christmas past before you do.

The 2014 Fundraising Effectiveness Report from the AFP has been released and is worth a look. I know we have Fund Ratio's in the UK, but it would be great to see something like this in the UK too.

Veritus Group with an important reminder to remember what it is all about.

The Nonprofit Marketing blog shares seven ways to keep donors committed to your cause.

A good case study on how Childs i (a charity I'm proud to donate to) went mobile.

Ann Green asks if your organisation can pass the donor-centred test?

Charlie Hulme guests at Bloomerang and asks what do 2014's fundraising successes have in common?

How do you become unforgettable to your donors? Jose van Herpt from Good Works explains.

The Story of Telling blog considers the Fogg Behaviour Model and how you motivate people to buy (or donate).

David Meerman Scott with eight ways to ruin your chance of making a sale.

I've been thinking a lot about the principles of relationship fundraising in recent months and trying to digest some great content from the likes of Donor Voice, the Agitator, the Revolutionise annual lectures and Richard Turner.

I'm convinced 2015 will be the year when fundraisers will be forced to implement the principles of relationship fundraising rather than just say the right things about them. The reason? The ever rising cost of donor acquisition and increasing attrition. 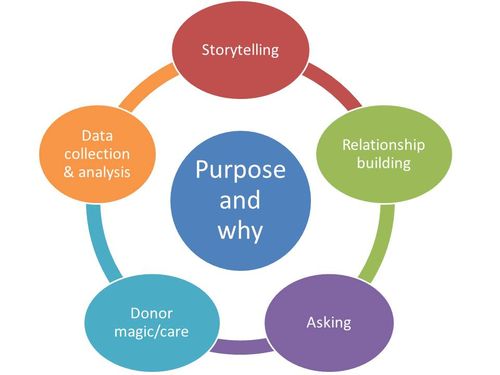 Great relationship fundraising is a combination of the five things with your charities purpose underpinning everything you do.

Over the coming weeks and months I'll be taking a closer look at each element and how they all interlink.