Three legacy packs to take inspiration from and an insincere p.s.

I was doing some research on legacy fundraising packs last week at Royal Mail's Market Reach in Soho. Here were three ideas and concepts that I really liked.

Macmillan Cancer Support - asking donors for their feedback and opinion

The first pack was for Macmillan. It wasn't a direct legacy ask, but instead asked supporters for their opinion on three legacy ads that they were thinking of running later in the year.

Each ad had a handwritten question for people to consider. Here's one of them: I thought it was a very clever way to get people thinking about legacies without actually asking for legacies. The pack also had a response form where people could give their feedback and also ask for more feedback on how they could leave a gift in their Will. Simple, but clever and I'd love to know how it was received.

The Brooke - using nostalgia and a vision for the future

I also really liked the pack from the Brooke. It was written from the granddaughter of the founder of the charity. It was a very personal story about her grandmother and the values that inspired the founding of the charity.

As well as using nostalgia to look back (see the picture below), it also sold a vision for the future and clearly demonstrated how the donor could play a part in that by leaving a legacy. Here's a couple of sample paragraphs that demonstrate this:

"As you are one of our most caring supporters, I'm wondering whether you too might be moved and inspired by the possibility of making a lasting difference for animals, like the one my grandmother has made. By leaving the Brooke a gift in your Will, you could transform the lives of countless working animals, and all the people who depend on them to earn even the most basic living.

"Just for a moment, I wonder if you could think of the world as you'd like it to be, perhaps in a few generations time. Perhaps you think of it as a place where every foal can grow up free from fear and suffering." 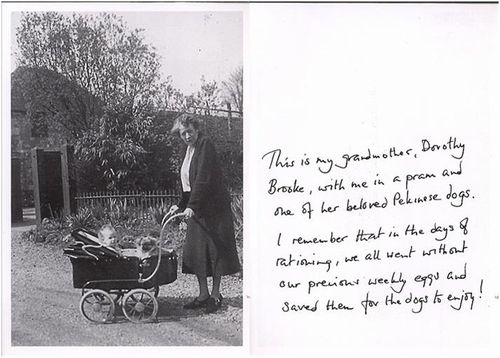 Alzheimer's Society - linking an everyday activity with leaving a legacy

Although I didn't think the copy was as donor centred on this pack, I liked they way they linked the gimmick/incentive of a teabag with the issue of caring for someone with Alzheimer's. One thing that stood out in all best packs I found was that they focused on the donor and how they could change the world. They also seemed like a letter from one person to another and were very believable.

Unfortunately, one pack that asked for donor feedback and comments (not one of the above packs) let itself down by then saying this in the comments:

"I value your opinion and it is always great to hear about the thoughts of someone who cares about the work we do. I hope you will understand that unfortunately we cannot respond to every comment."

What a way to blow the goodwill you've spent four pages building!

Basically this p.s. says "Give us your money, we don't really care what you think, you're one of thousands of supporters and we're hoping enough of you will give. The survey was just a gimmick we've been told to include as it boosts response."

Such a caveat surely can't be good for your long term legacy engagement plan?

An Example of Why the Little Things Matter

I wanted to follow up my posts last week with an example of how the little things can make a big difference.

It's about a legacy mailing my mum recently received from the charity who she sponsors a child with.

Nearly every effort had been made to personalise the mailing and to create the illusion that is it really was a one-to-one communication with my mum.

The signatory of the appeal had enclosed a business card, their picture was in the enclosed brochure, the letter named the child being sponsored and the response form was also personalised.

I was really impressed with it and it nearly created the impression of a personal letter until I turned over the page.

A badly scanned in, photocopied signature.

Why go to all the effort to produce such an individual mailing and then not take the final step and sign the letter personally?

Now you might say that no-one would expect a genuine signature or it would take too much time and that it wouldn't be worth the effort.  For me that simply isn't good enough.

Given a typical legacy can be worth over £50,000 then it must be worth finding a way to sign the letters?

For example, you could do them in batches so you can better respond to any replies. This would also give you the opportunity to tweak future versions and you could also then have the time to do a follow up phone call.

Now you might think I'm being overly critical and picky, but given that so much effort had gone into the pack and the data selection (my mum is approaching 60 and has given for a number of years - a prime legacy target) then it is such a shame they didn't take the final step and truly make it a stand out communication.

As Seth points out:

I've been amazed at how many phone calls I've received over the last couple of weeks from advertisers offering me 'a great deal' and an 'unmissable opportunity' to advertise my charity in their esteemed publications and websites.

I'll be honest and say I'm a bit sceptical about advertising in solicitor's publications and on websites/magazines for the over 50's as I haven't seen any hard evidence that someone has chosen to leave a legacy because of an advert they'd seen in one of their brochures.

There are two main problems with this type of legacy advertising:

The money spent on advertising for legacies would be better invested on research to understand your donors and their motives for giving and then using this research to produce outstanding communications that would inspire them to want to leave a legacy to you.

This might be harder work, but I'm convinced it will be far more successful in the long run.

I would love to hear if anyone has any success stories about advertising for legacies in this way.  I asked about this on Twitter and the responses I got from @parkeslife, @markyphillips and @derekhumphries suggested I am right to be sceptical...

The latest Institute of Fundraising newsletter members contains a couple of interesting articles, with my favourite being this one: reminding people about some of the key facts and fundamentals of legacy marketing.

Richard Radcliffe's 'Seven Keys to Success' should be etched into every fundraisers mind, as every fundraiser (regardless of discipline) should be promoting legacy giving when the have the opportunity to do so. What Richard doesn't know about legacies probably isn't worth knowing. If you're interested at all about legacies, then do try and hear Richard speak.

As well as being highly entertaining, he is also extremely knowledgable and has conducted thousands of focus groups and interviews with potential legators.